The first week of April, Marina and Nick went to the Western Bat Working Group Biannual Meeting in Santa Fe, NM. The meeting was geared to updating the Western Bat Species Regional Priority Matrix in the face of new threats such as climate change and white-nose syndrome. Break-out groups for different Landscape Conservation Cooperatives (LCCs) worked together to assess the scope and severity of different threats for every bat species in the western United States. Assessing threat levels for all the western bat species is a difficult process but worthwhile if we want to effectively manage and protect bats! Marina presented her poster “Comparing three bat acoustic sampling methodologies for large-scale surveys” and received lots of good feedback from researchers interested in conducting mobile acoustic surveys.

Nick was awarded a seat in a three day Wildlife Acoustics Bat Detector Training Course, led by Dr. Cori Lausen, through the Bob Berry Scholarship Fund. The course immediately followed the Western Bat Working Group Meeting, and covered the use and deployment of the SM2BAT+ and the EM3, along with an introduction to call analysis in Kaleidoscope Pro, SonoBat, and AnalookW. Nick is very thankful for this award, which has helped him become more knowledgeable in the set-up and deployment of these Song Meters, which he will use during his acoustic surveys beginning this summer in the Jemez Mountains of New Mexico.

It was a real delight to have Daniela Schmieder visiting for a week at the beginning of the month. Dani worked with myself Julie and Ain in Malaysia a few years ago, where she was looking at echolocation performance in Kerivoula and Murina species for her Diploma (got some very nice papers out of it too, which you can learn more about here and here). She is now finishing up her PhD work on the role of functional morphology in resource partitioning of syntopic European bat species (primarily Rhinolophus species), at the Max Planck Institute for Ornithology in Seewiesen (which I visited earlier this year) where she is part of the late Bjoern Siemers’ Sensory Ecology Group.

She gave the lab a great presentation on her PhD research, and worked with me on one of her dissertation publications, but there was plenty of time for fun, as we did a day hike out to the Lighthouse at Palo Duro Canyon. Hopefully we will catch up with her at the IBRC (International Bat Research Conference) in Costa Rica, later this year. Below are some pics of her visit…. 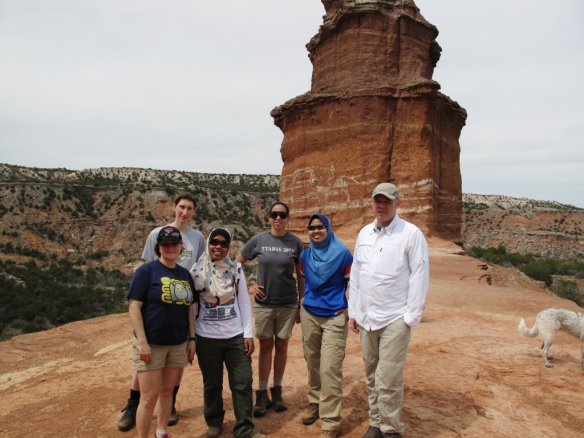 At the Lighthouse — what cool bat nerds. From left to right, Tigga, Dani, Julie, Maria, Ain and Danny (honorary bat nerd) – 6 people, 5 nationalities 🙂 — Joe was studying for his quals or we would have had a sixth. 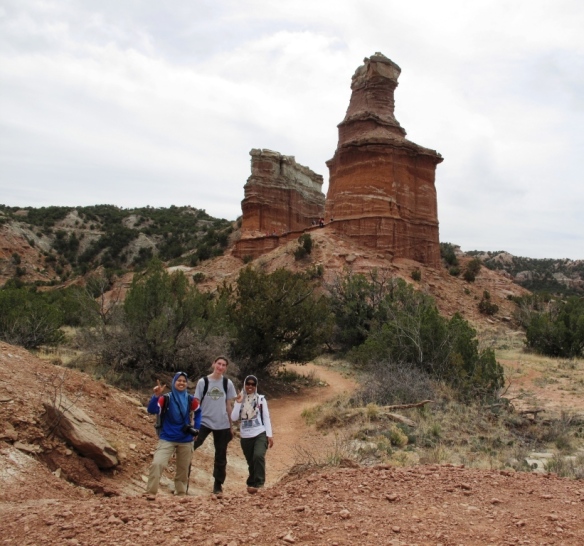 Lighthouse in the background, Dani (the tall one) with Julie (right) and Ain (left).