I am from Bryant, AR, a small town just outside of Little Rock.  Here, I attended the University of Arkansas at Little Rock (UALR), where I received my B.S. in Ecology and Organismal Biology (2012).  While working on my B.S. I performed small mammal surveys for Terracon and Audubon, maintained UALR’s dermestid beetle colony, and assisted several graduate students in the field.  I also had the opportunity to travel to the Appalachian Mountains to collect and study several lowland and montane salamander species as part of an NSF-REU.  In addition to my lifelong love of wildlife and the great outdoors, my experiences here started me on my career path towards becoming a wildlife biologist. 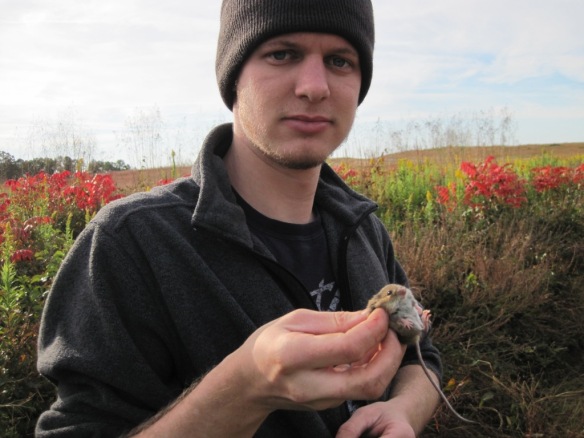 My primary research interests are in the field of behavioral ecology of mammals (particularly bats) in relation to their conservation status.  In other words, how are normal behavioral patterns affected by environmental changes?  Particular topics of interest include behavioral responses to habitat alterations, disturbances that affect roost sites, and alterations in food availability.  Acoustic communication and sociality in bats are also of particular interest to me.

Hence, at TTU, I will be studying the effects of wildfire and prescribed burns on forest-dwelling bats in northern New Mexico.  In particular, I will be looking at the effects of fire on bat activity levels and prey abundance.  My research will be conducted in the southwest Jemez Mountains in the Santa Fe National Forest, beginning in May 2013.  The wildfire portion of my study will be conducted on the Valles Caldera National Preserve, New Mexico, within the boundaries of the 2011 Las Conchas Wildfire.  The prescribed burn portion of my study will be conducted south of the Valles Caldera, in the area where the Paliza prescribed burn is scheduled for Fall 2013.

Most North American bats depend on forests for foraging and roosting habitat, but bats can be equally as important to forests.  With declining bat populations, increasing deforestation, and fragmentation of forest habitats, the importance of proper ecosystem management continues to escalate.  Increasing wildfires have also resulted in substantial loss of valuable habitat and food sources for wildlife.  As climates change, wildfire intensity and frequency is predicted to increase.  In particular, forests in the United States Southwest are already experiencing large and extreme wildfires in recent years (e.g., Las Conchas and Wallow Fire (2011), Whitewater-Baldy Fire (2012)).

For these reasons, my thesis project will strive to determine how bats and their prey are affected by both wildfire and prescribed burns.  The results of my research will potentially assist land managers in establishing knowledgeable, bat-conscience management plans that would benefit both threatened and non-threatened bats and ecosystems.  Upon the completion of my MS I plan to continue my education and work with bats by pursuing a doctorate.